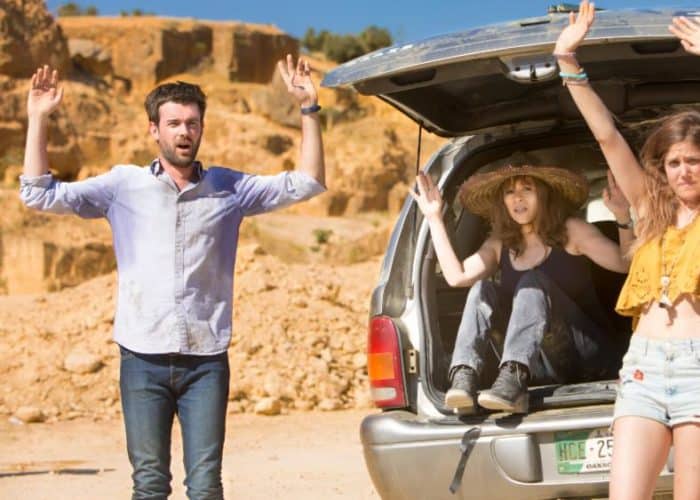 When Barnaby Walker’s antiques dealer father ends up in hospital following a mysterious accident he’s forced into the family business to save it from liquidation. Realising that he’s in £50,000 of debt and in possession of looted treasure, Barnaby makes a drastic entrance into the criminal underworld to recoup his losses. Enter Nina Morales, a Brooklyn based bounty hunter and Barnaby’s rival antique dealers Keegan and Webb Sherman, two identical twins as pompous as they are ruthless.

One of the main challenges faced by Lexhag on Bounty Hunters was to sell the illusion that the characters of the Sherman twins were played by two actors, in fact they were both played by actor Bradley James. To achieve this, a twin set of plates (excuse the pun) was filmed for each setup. In one take James would play the role of Keegan with a body double playing the role of Webb and for the second take the roles would be reversed. During filming, both actors were placed in strategic positions to aid in split screen integration during post however for some setups this was not possible and required a more technical approach to the shots.

As well as the standard overlaying of Take A with Take B, a number of shots required more complex rebuild work in the compositing stage. Examples of this include having to replace the head of the body double with James’ head by rotoscoping James’ head and tracking it to the motion of the body double. The A/B plate ‘seams’ were also not always perfect and in the case of crowd scenes, would require multiple elements to be overlaid on top of each other to disguise the areas in frame where the action crossed.

For more detailed close ups of the twins we also took the approach of shooting a background plate with one twin and then shooting the other twin on a green screen. This green screen plate was then superimposed onto the background plate giving the illusion that both twins were shot together. Focus pulls added an additional level of complexity where a version of the focus pull/lens distortion had to be created digitally, all to the give the illusion that both plates were shot at the same time.