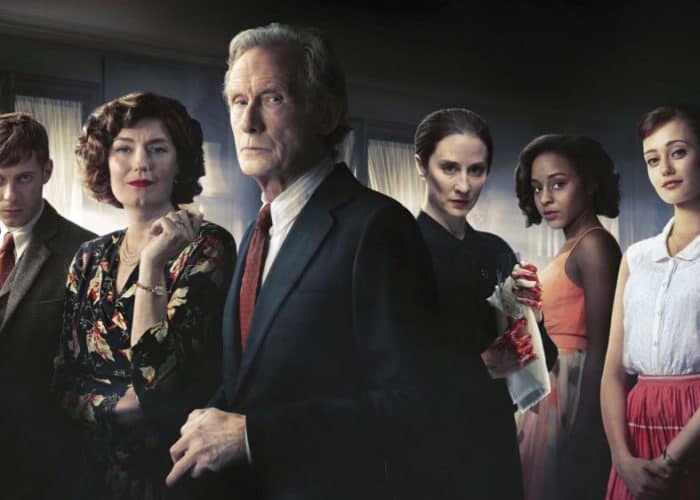 “Ordeal By Innocence”, the three-part series that kept the nation on the edge of their seats, is a classic Agatha Christie whodunit produced by Mammoth Screen and Agatha Christie Ltd  for BBC One and Amazon Studios.

It was essential that the VFX be invisible, and enhance/support the story-telling. The family estate Sunny Point was one of the main characters in the story. An essential element for the creation of the right atmosphere for this psychological intrigue. Foliage needed to be filled in and brightened to enhance the Summer setting, as although the drama is set in England, the show was filmed in Scotland and it was necessary to relight the outside of the house with the warm glow of a ‘golden hour’ sky. To add to this, for aerial footage, shot with drones, we re-positioned the building to the middle of a dense forest to enhance the feelings of solitude, mystery and danger. The focus of the story is the interaction between the characters and the environment so our work was to enhance the environmental atmosphere without drawing attention to the visual effects.

The project also underwent an unforeseen reshoot stage that had be be turned around very quickly. The reshoot took place in February and the team had to hit the Easter transmission deadline. From the very start it was vital that the blending of original and new footage must be seamless; so as to keep director Sandra Goldbacher’s vision of the show intact. As the reshoot took place in the middle of winter, with snow lying on the ground, it was impossible to recreate every shot on location. Lexhag’s VFX Supervisor Shaun Varney started with a comprehensive break down of all of the shots to allow us to easily rise to the challenge of incorporating a new actor into the series.

For the lakeside shots, we were able to programme the motion-control rig to replicate complex movements and angles to enable us to replace the original performance footage with the new performance footage seamlessly. The camera was mounted on a boat, with a rack-zoom lens, creating lots of odd motion and bobbing around. This was all about matchmoving the camera moves so that we could feed them into a green screen monitor control rig. Then we had to film the performer with the same camera move. During this process our Lexhag team of compositing artists had to use all their flexibility and ingenuity to handle all the challenges that arose; we took copious notes and reference photographs, measuring everything accurately, then used the new footage to improve the scaled distances through comp.

The lake scene between Mickey Argyll and Tina Argyll was the most complex shot of the show. Both characters had a meeting by the lake near the house which was impossible to re-shoot as the weather conditions did not allow for it. So our job was to create a digital matte painting from high res images taken on the summer shoot. The actors were shot in a small water tank in a green screen stage with locked off and dolly camera moves. The comp artists then matched the scene, crafting every element to accomplish a realistic look.

For the reshoot of the wedding picnic scene, not everyone in the cast was available and the possibility to use the original location was out of the question, so we had to modify the old material to integrate the new member of the cast. Looking over the scene we were able to work out that with two body doubles and a replacement actor we would be able to shoot the scene on a green screen. Shot for shot we matched layouts and performers in this way. The Lexhag compositing team got to work stripping apart the original plates into layers, then taking out the old performers and replacing them by seamlessly weaving in the new footage.