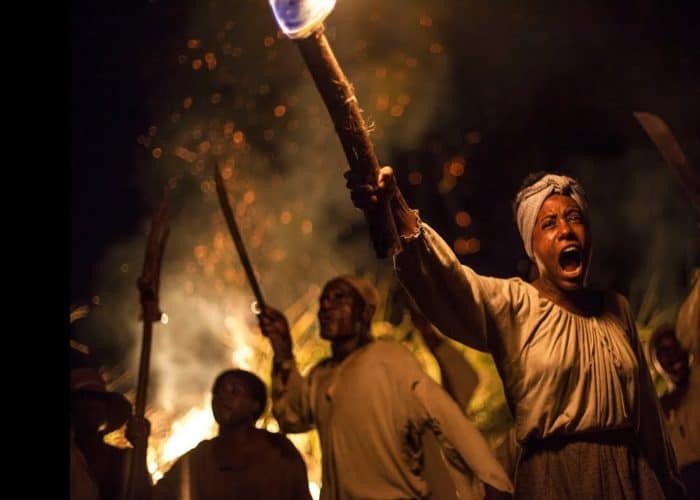 For our work on The Long Song, Lexhag VFX was tasked with a number of creative challenges.

Episode one of the show involved a sequence where the main character levitates off her bed in a dreamlike state. In reality, this was done practically using wirework, however, to fully immerse the audience into the scene we needed to remove all traces of the wires.

As well as using standard techniques to paint out the wires we also had to rely on more bespoke methods to rebuild some of the clothing where the actor’s harnesses had been attached. Taking patches of clothing already in the plate we then tracked them to the harness positions and even had to imitate cloth motion of the deforming garments using a 2D technique called smart vectors.

Other feature scenes Lexhag played a major role in were the death scenes involving gunshots. On set this wasn’t achievable using standard SFX techniques so as well as embellishing the real prosthetic wounds on the actors we also have to add blood ‘splatter’ to provide a sense of realism to the scenes. This involved taking separate 2D elements of blood splatter and meticulously tracking them onto the plates and with one scene involving thirteen separate blood effect shots, making sure each one matched for continuity.

Finally, a recognisable scene in the final episode of the series involved a bowl of cockroaches at a dinner table! On the day, the real cockroaches didn’t ‘perform’ quite as expecting and to add more ‘revulsion’ to the scene we needed to generate CG cockroaches of our own that we could fully control. Firstly our 3D dept modeled/textured a CG cockroach to match the real cockroaches on set. These were then rigged and custom animated to add the movement required to make it look as though they were bursting out of the bowl and onto the dinner table. The final stage was to add CG lighting to the digital cockroaches so they seamless integrated with the real thing in the final shots.